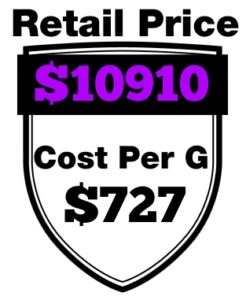 The Professional is a commercial grade, full range lineal machine. It has an impressive 15g maximum G force, and a frequency range from 30 to 50Hz with a 2-3mm low and high amplitude range. The frequency is accurately displayed on the controls and the platform is quite large as expected on a commercial machine. The Professional scored a total of 68 points, and easily passes the Performance badge.

The VibroGym brand and the Professional model, has been involved in a good number of studies. It should be noted that prior to 2004, and even some years after, studies that listed Power Plate as the equipment, were actually Vibrogym studies. The Professional was awarded 60 points and a pass for the Science badge.

The company behind Vibrogym started in The Netherlands in 1999, so is a very well established company. The company scores well for integrity also, but unfortunately like many others, they fail to advertise their amplitude and G force specifications. I’m not sure that too much innovation can be attributed to Vibrogym, an earlier lineal machine was developed in 1998 under the NEMES brand, and all features thereafter have come from other companies too. There is no evidence of charitable programs or examples under Vibrogym.

The Professional scored only 24 on the Warranty badge The Professional has a 2 year warranty on labour, parts and motor, but no returns policy with shipping and restocking fees. Parts and servicing are held locally by the importer, but there are a number of major countries which don’t have local support, e.g. USA. Check with Vibrogym for local coverage.

Unfortunately the Professional is let down by a distinct lack of support, if you buy a Professional, you’re on your own. No personalized support, no online training resource, a very basic user manual and an exercise poster in the box, no courses or workshops, and only a business hours phone number for support. I’d like to see Vibrogym do better on this.