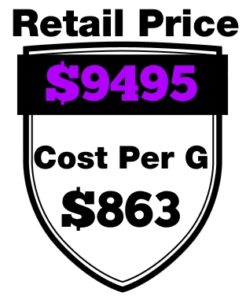 The Pro5 by Power Plate is a commercial grade, full range lineal machine that has been studied extensively and is a common sight in many gyms and clubs. It has a good range of high frequencies, and a low and high amplitude option. Overall, the Pro5 would be best suited to elderly users, or for those with medical goals rather than fitness goals. The Pro 5 is one of a handful of 5 star ratings on this site.

The Pro5 scored a total of 61 points, giving it a pass on the Performance badge. The Pro5 is a full range lineal machine, with a 1mm and a +2mm amplitude option. The frequency range is from 25 to 50Hz, which is displayed on the control panel. The Pro 5 has a large platform that is expected on a commercial model machine.

The Power Plate brand and the Pro5 model, has been studied quite extensively. Therefore, the Pro5 was awarded 70 points and a pass for the Science badge.

The Pro5 scored 77 on the Warranty badge, it has a 2 year warranty on labour, parts and motor, and a 30 day returns policy with shipping and restocking fees. Power Plate appear to have good supply of spare parts, and ability to service equipment on-site.

The My3 has a solid support program and passed easily with a score of 65. Power Plate have excellent online resources, including many video workouts and tips. The “in the box” content consists of a user manual, and training guide. Power Plate are the only company who are actively running courses and workshops consistently. You can reach Power Plate via their website live chat, business hours phone number and their social pages are active.