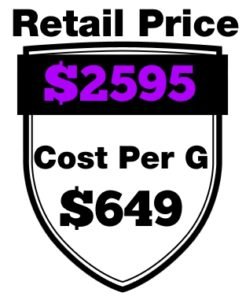 The My3 by Power Plate is a very basic lineal machine that comes with a large price tag due to the Power Plate name. It only has very limited control options, and is much lower powered than their large commercial machines. This fact is important, because Power Plate fail to differentiate between their models and the differences in outcomes you might expect from them. For example, several studies have shown that increasing the G force, increases muscle activation, and therefore I feel that it is a little misleading to make no effort to distinguish this difference in the marketing for the My3. Overall, the My3 would be best suited to elderly users, or for those with medical goals rather than fitness goals.

The My3 scored a total of 44 points, meaning it just gets a fail on the Performance badge. The My3 is limited to fairly low G levels due to a maximum and single frequency option of 35Hz only. There is no ability to increase or decrease the frequency on the machine, just a low amplitude or a high amplitude option. It was classed as a full range lineal machine, which requires both amplitudes below 2mm and also above 2mm. However, in the Vibtech Analysis report on the My3, it reached a maximum amplitude of 1.95mm which sees it just pass into a full range classification via room for error.

The Power Plate brand has been studied quite extensively and the My3 was used in a study on knee osteoarthritis and showed favourable outcomes, therefore according to our methodology, the My3 was awarded 15 points for some science, but a fail on the Performance badge, means a fail on the Science badge.

The My3 scored 76 on the Warranty badge, it has a 2 year warranty on labour, parts and motor, and a 30 day returns policy with shipping and restocking fees. Power Plate appear to have good supply of spare parts, and ability to service equipment on-site.

The My3 has a solid support program and passed easily with a score of 65. Power Plate have excellent online resources, including many video workouts and tips. The “in the box” content consists of a user manual, and training guide. Power Plate are the only company who are actively running courses and workshops consistently. You can reach Power Plate via their website live chat, business hours phone number and their social pages are active.